We will spend a lot of time loading data from brain images.

As you’ve already seen, NIfTI is a very simple format that is typically a single file with extension .nii. If the file is compressed, it will end with .nii.gz instead.

Inside, the file contains:

To load these images into Python, use the Nibabel package.

Start by importing the Nibabel library:

We will use the Nipraxis package to fetch the image data file:

Load the image into memory:

The image has a “header” containing the information about the image:

If you happen to have the FSL package installed, you can get the same information from FSL’s fslinfo. If you do have FSL, run this command from the terminal:

It is important to have a clear picture of what we are dealing with. First, we have the NIfTI file, which is a regular file stored in a hard disk with name ds114_sub009_highres.nii. In order to access the contents of the file, we invoked NiBabel’s load() function. The call created a Pyton representation (meaning, a Python object) that is capable of understanding the NIfTI format and therefore access the file. As an example, we printed out the information contained in the header with NiBabel’s interface. The interface has other convenience tools to access information about the image, for instance, the shape of the data grid contained by the NIfTI file:

At this point, we haven’t accessed yet the actual values that make up this image. Because we haven’t done so yet, NiBabel has not allocated any memory space for it, meaning, data remains sitting in a hard disk and it has not been copied into your RAM (random access memory or fast memory). When you are ready to visualize or analyze the data, you will need to create such a copy into the fast memory of your machine.

Like the img.header property, NiBabel’s representation of NIfTI images offers direct access to the data array through its own property:

Accessing the data array directly with img.dataobj is generally not recommended. Instead, we can load the image data directly as an array of floating point numbers with img.get_fdata(). Once loaded, we can confirm that now the values in the NIfTI file have been loaded into memory as a Numpy data array, of data type float64.

Naturally, we can use all the tooling Numpy offers, for example, to extract summary statistics:

To get a sense of what a 2D slice looks like, let’s visualize the middle slice: We might be interested to look at the histogram of voxel values in this 3D block. In order to do that, we np.ravel the 3D volume to 1D, to throw away the spatial arrangement of the voxels. At a bird’s eye view, the extremes of the histogram are the most informative bits. On the far end, the histogram extends to very large voxel values (a bit above 3000) with very small voxel counts (just a few voxels that are very bright). On the origin, there’s a massive amount of pixels with zero or almost-zero value (corresponding to the background). Let’s plot the histogram corresponding to values above zero to exclude the very large number of zero-valued voxels, and below 1000 to exclude the scarce voxels with very high values. Let us return to the middle slice. As for any array, we can transpose it, to flip the rows and the columns: To get the display you usually see in dedicated imaging display software, we need to transpose and flip up to down: We are looking at a slice over the third dimension. We will sometimes refer to this as a plane. We can see that the planes are 2D images, where left to right is the first axis, and back to front is the second axis.

As in arrays and 3D, we can think of the 3D image as a stack of planes, where the bottom plane is the first, then the second is the second from bottom, and so on: 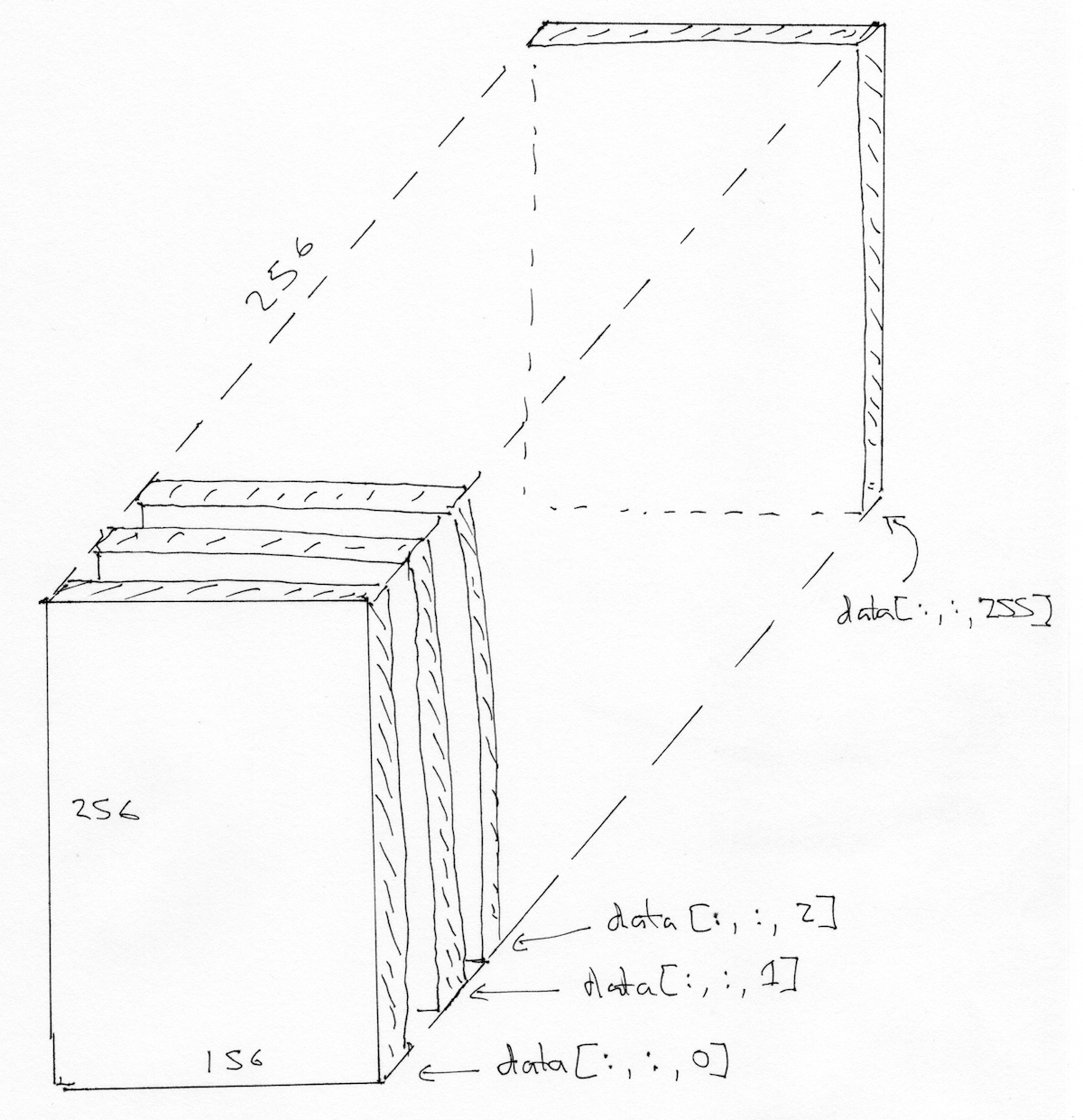 We can also think of this 3D image as a stack of 2D images where the 2D images are (back to front, bottom to top), like this: 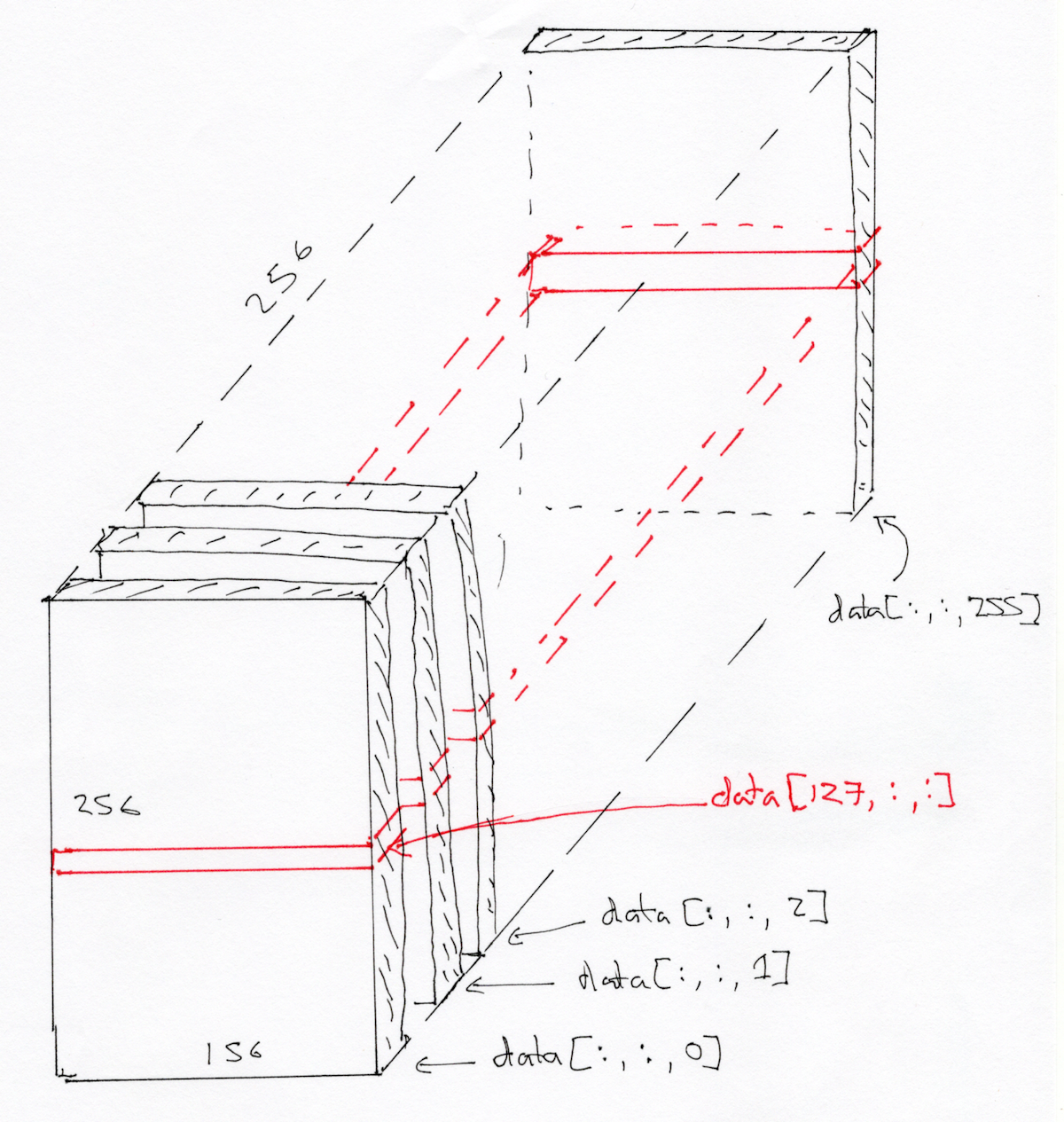 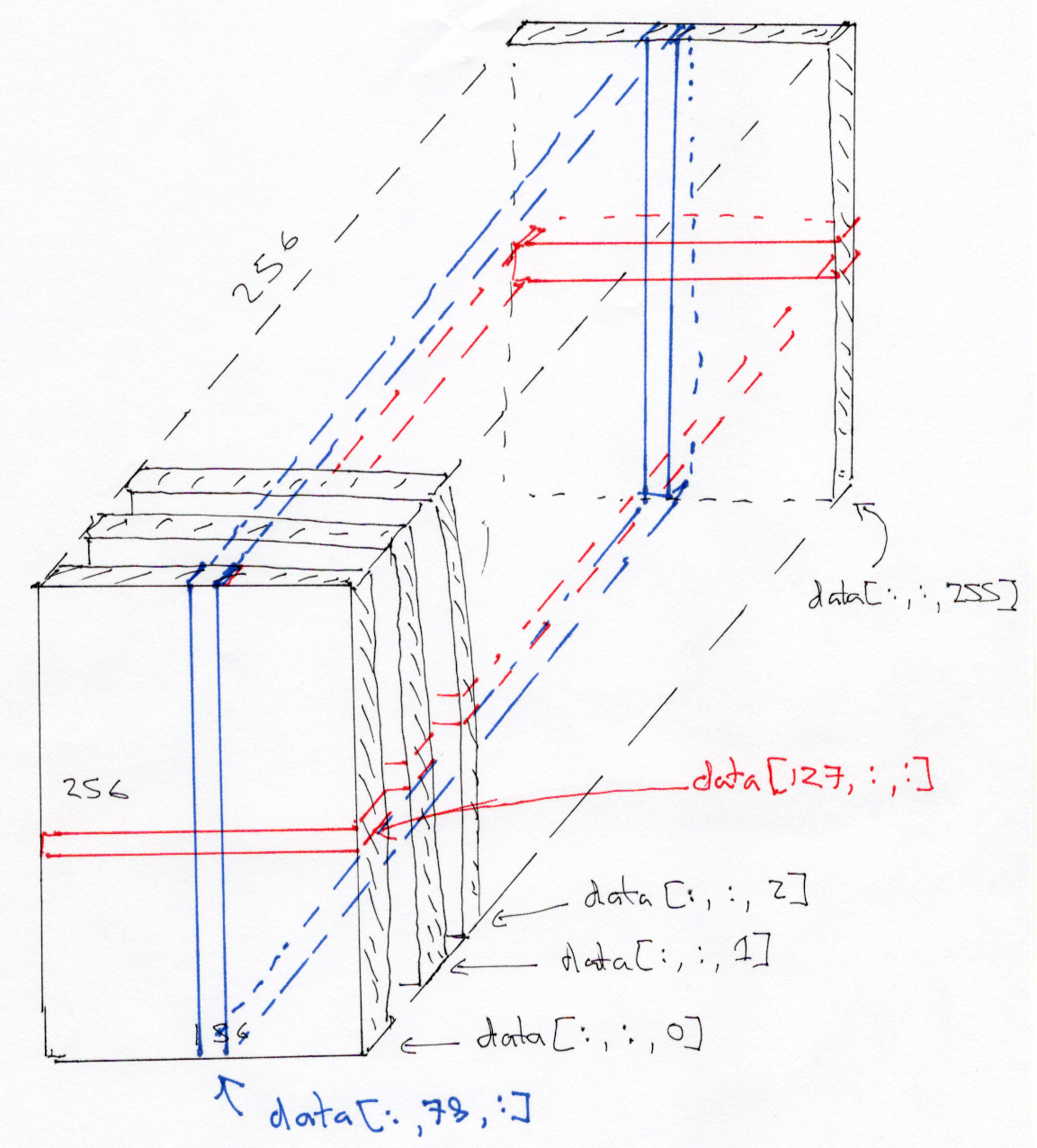 NiBabel’s Python representation of images offers a helpful utility to look at images through three viewplanes, implemented as a function attached to image objects (hence, a method of the object):